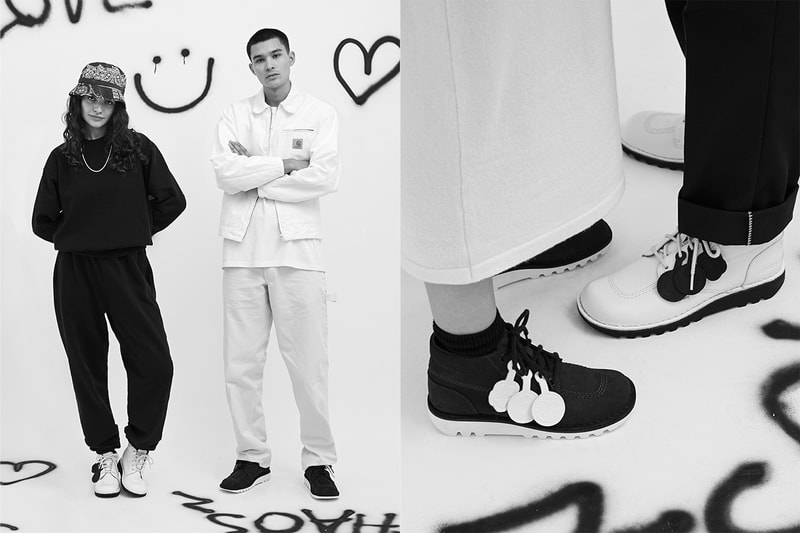 After launching its Kick Hi “Pastel Pack” earlier this year, Kickers returns for Fall/Winter 2021 alongside London retailer Goodhood for two monochromatic twists on the emblematic silhouette.A shoe steeped in history, the Kick Hi has become a cult favourite in the British music scene since its inception in 1975. Dressing everyone from attendees at Acid House raves in the late ‘80s and much of Britain during its Brit pop stage, to the more recent indie movements throughout the 2000s, it’s a shoe that has become the uniform for a variety of subcultures.Now, drawing on this extensive history, Goodhood takes a spin at the silhouette with two monochromatic iterations.Equipped with chunky contrasting soles, a black Kick Hi is crafted with smooth matte uppers, whilst a white style boasts mottled leather, both of which are then rounded out with logo-embossed fleurettes.The full Goodhood x Kickers Kick Hi collaboration is available to buy from 11am BST on September 30 in limited quantities exclusively from the Goodhood webstore.In other footwear news, ahead of the release of its latest Air Max 1, HYPEBEAST ranked the best Patta x Nike collaborations to-date. 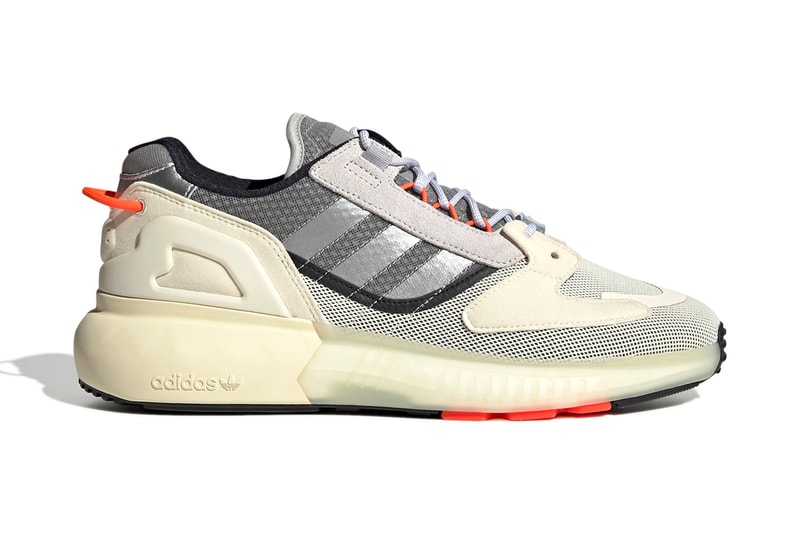 adidas Originals is introducing an all-new, yet oddly familiar silhouette to its roster of ZX shoes — the ZX 5K BOOST Lerna in “Silver Metallic/Cream White/Solar Red.”Drawing inspiration from the ZX 5000 — hence the name 5K — we find similarities between the two with touches on the new iteration appearing more contemporary and futuristic in style. For example, the rubber and synthetic suede heel cup is styled in the shape of the original, but appears like a molded piece rather than a stuck-on extra as it is on the older style. The Three Stripes are also updated in “Silver Metallic,” and instead of being woven into the mesh, they’re printed onto the mesh in a reflective finish.Elsewhere, adidas Originals crafts the entire front section from micromesh and uses suede panels for structural integrity, while more mesh has been used for the tongue where fabric D-loops hold rope laces and a dragon-displaying dubrae. The idea of a dragon further inspires the shoe with fiery “Solar Red” touches hitting up the aforementioned D-loops, heel loop, and outsole, while actual dragon graphics grace the sock liner. Rounding out the shoe is, of course, a full-length BOOST midsole, which is partially covered at the rear on the exterior of the shoe.The adidas Originals ZX 5K BOOST Lerna retails for $260 AUD (approximately $187 USD) and is set to release on adidas’ regional Australian site on October 4.For more ZX goodness, check out the Kawasaki x adidas Originals collaboration that’s on the way.

The Fashion Law has reported that Walmart has filed a new opposition petition against Kanye West’s YEEZY with the U.S. Patent and Trademark Office.The American megastore is arguing that the 2020 trademark application filed by YEEZY holds incredible similarity to the multinational corporation’s “sunray logo.” The original application cites that YEEZY intends to use the logo for its retail store services, clothing, hotel services, musical sound recordings and streaming as well as for constructing “non-metal modular homes.”Walmart argues that the logo leaves a “likelihood of confusion, dilution and lack of bona fide intent to use claims in place.” The corporation also claims that the YEEZY logo is “a close approximation of [Walmart’s] logo, which had been in wide use long prior to [Yeezy’s] filing date,” as both parties’ “designs incorporate lines of equal length radiating out from the center to resemble a spark or sunburst.”Walmart is not thrilled with the fact that YEEZY’s mark could “falsely suggest a connection with [Walmart], to [Walmart’s] detriment,” therefore is standing firm on the denial of the registration of the mark. Seeing that Walmart has used the logo since 2007, they see “no issue of priority.” YEEZY currently believes that their mark is still distinct enough to proceed.In case you missed it, the Nike CEO claimed that the Off-White™ Dunk Low went to the “most deserving” SNKRS users.